Can You Post Pictures of Someone on Social Media Without Their Consent?

Home
/
2021
/
April
/
Civil Rights
/
Can You Post Pictures of Someone on Social Media Without Their Consent?
Apr 29, 2021 by walter in Civil Rights

Written By: Christopher B. Dolan and Matthew D. Gramly

Tony from Belvedere asks: Do I have any right to privacy if others use photos of me that I posted online to social media or for other purposes since it’s without my permission?

Dear Tony: This is an interesting question, and one that evolves in the age of Facebook, Twitter, Tik Tok and other social media sites that people use to post photos and videos of themselves, their families and friends. Once you post a photo or video of yourself online, do you still own it? Do you still have any control over it? Can you stop others from using your photos and videos if they don’t have your permission to use them?

There is a case out of San Diego, a lawsuit that was filed last month, which can provide some real-time insight into these issues. In June 2020 a woman named Amber Lynn Gilles went into a Starbucks location to get some coffee. She was not wearing a mask and refused to put one on while inside the store. The barista who was serving her, Lenin Gutierrez, explained the store’s mask policy to her and politely told her that he could not serve her unless she put on a mask. She again refused, threw a fit, called the employees and other customers, “Sheep!” and other derogatory names and then left the store in a huff without a coffee.

Later, Ms. Gilles put up a post on her public Facebook page which included a photo of Mr. Gutierrez with a caption that misspells the barista’s name, “Meet lenen [sic] from Starbucks who refused to serve me cause I’m not wearing a mask. Next time I will wait for cops and bring medical exemption.” She attempted to publicly shame the Starbucks employee with her Facebook post. That plan backfired spectacularly. 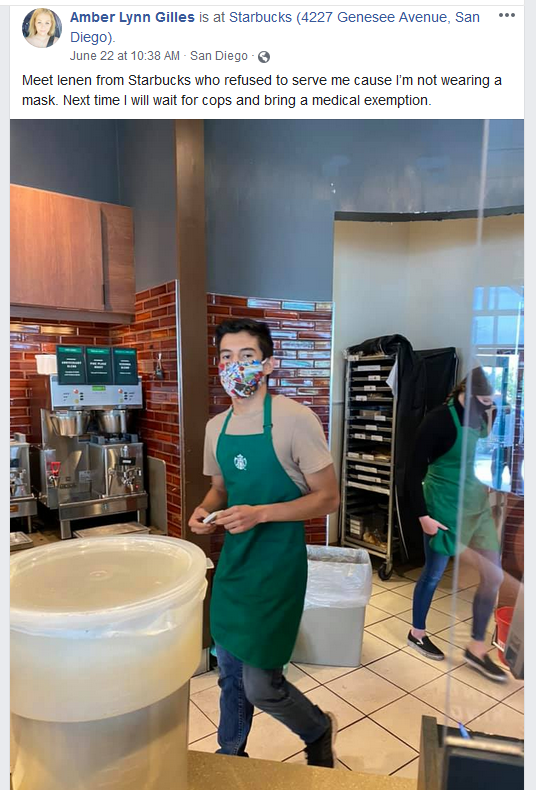 While Ms. Gilles’ Facebook post did go viral, it inspired a man named Matt Cowan, who had never met Mr. Gutierrez, to start a GoFundMe page for Mr. Gutierrez’s benefit. Mr. Cowan wrote on the Go Fund Me page that it was for the benefit of a local barista’s, “honorable effort standing his ground when faced with a Karen in the wild.” The name “Karen” has morphed into pejorative vernacular denoting a typically white, suburban, entitled female who throws a very public and energetic tantrum beyond the scope of what might be construed as normal. Mr. Cowan’s Go Fund Me page also went viral and it eventually raised over $100,000 for the Starbucks barista, who received all of the money minus taxes owed.

Ms. Gilles was upset that so much money was raised for the Starbucks’ barista. She demanded half of the money because, after all, there would not have been a Go Fund Me for the benefit of Mr. Gutierrez without her. Her demand for money was refused, so she filed a lawsuit against Mr. Cowan, the person who started the Go Fund Me page. Part of her lawsuit stems from the fact that Mr. Cowan had included a screenshot of Ms. Gilles’ Facebook post in the Go Fund Me page.

In her lawsuit Ms. Gilles claims that Mr. Cowan had misappropriated the screenshot of her Facebook page and that he then used the image without permission and for the purpose of publicly painting her in a negative light, which she alleges is an invasion of her right to privacy. Amusingly, both parties to the lawsuit turned to Go Fund Me to crowd source their legal fees. Ms. Gilles has raised $6,000 while Mr. Cowan has raised $14,000 using the headline, “Help, I’m being sued by a Karen.”

These facts raise several issues ranging from Ms. Gilles’ purported right to privacy in a public Facebook post to Mr. Cowan’s First Amendment right to freedom of speech in posting to a Go Fund Me page about Mr. Gutierrez’s plight. Noting that Ms. Gilles’ lawsuit is subject to being dismissed pursuant to an Anti-SLAPP motion (a mechanism in the law designed to prevent people from being sued for speaking out on issues of public concern or significance), Eric Goldman, a professor at Santa Clara University School of Law, balances the rights of each party to this lawsuit: “The publicity rights are limited by the First Amendment and I think that the First Amendment ought to apply here.” Goldman goes on to suggest that Ms. Gilles will lose her lawsuit: “I really think it will be an easy case. That there was no way to tell the barista’s story without talking about what happened.”  So it seems clear that in this case, Ms. Gilles will not be successful in claiming a right to privacy in a public Facebook post about the same issues that Mr. Cowan posted about on his Go Fund Me page.

As an aside, Ms. Gilles also recently sued San Diego grocery store Sprouts for refusing service to her while she refused to wear a mask, claiming a mask exemption through the Americans with Disabilities Act. Dismissal of that case for failure to serve the Defendant is imminent.